iPhone Game Recommendations: Round One

A majority of my views come from my Facebook reviews for games like Cityville, It Girl, and The Sims Social. Well, I’ve recently entered the modern world and have been experimenting with iPhone games and I thought it was time to share my thoughts on some of the best (and worst games) I’ve experienced!

I’m a sucker for anything Jurassic Park-related, so when I saw this Cityville/Jurassic Park hybrid, I was definitely intrigued. For the most part, they got a lot right.

The graphics are clean, the game is simple, and fans of Jurassic Park will find a lot to like here. My only complaint with the main game is that it’s pretty straight-forward, meaning that you don’t have the freedom to build what you want, like in other city-building games. It tells you, “Hey, build a velociraptor now.” And that’s really your only option. Still, it IS satisfying. You dinosaurs start as little bitty guys and then you feed them until they hit adulthood. And then beyond that, they can go through several evolutions, each which comes with a new color scheme for the dinosaur.

I applaud that they tried to incorporate some tension to reenact the movie. Part of this succeeded in that there’s a mini-game in which you have to click on the carnivores in quick succession, to calm them down. The part that failed is that there are often missions that require you to delete, undo, or destroy your previous work. “Destroy 15 road sections and two buildings.” Well, as soon as you’re done, you’re going to rebuild those roads, so it all feels a little forced and irritating.

Now, the major detractor. The game crashed on me. It won’t run now. I load it and within 10-15 seconds, it boots me out to my main iPhone screen. After a few days of trying and getting kicked, I finally deleted the app and moved on. So, feel free to try the game and enjoy all the good it has to offer, but after investing a few weeks into it, it was frustrating to be unable to play anymore. Just my experience. 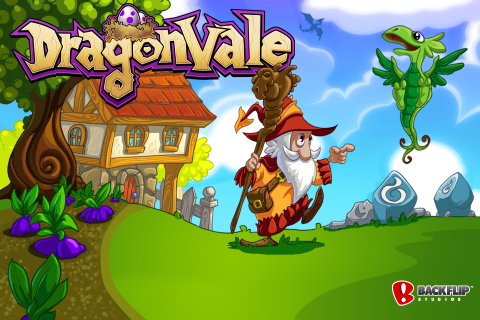 As much as I’m a sucker for dinosaurs, I’m a bigger sucker for dragons. Dragonvale is a breeding and collecting game, where you breed different types of dragons and hope to end up with rare and special dragons. Each dragon is uniquely drawn and moves differently throughout the world. After about a month, there is still definitely things to do but the sense of urgency is gone now that I’m really only trying to breed the rare types. You click to have them breed but then it could be a few days waiting time. It’s massive fun for a short time but the longevity of the game definitely hits a standstill.

So should you play it? I’d say yes. It’s fun for awhile and then you can move on. There’s a lot to enjoy here. And it’s an easy game to jump on real quick and then move on with your day, you don’t need to invest a lot of time each day on it. And the dragons are just so cool. 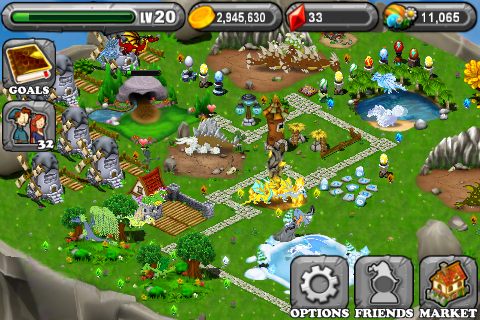 When I asked around for a good game that is easy to just waste a few minutes on, a few different people recommended Paper Toss. In this second edition, you basically attempt to throw a crumpled up paper ball into a trash can. There are wind variances and so you have to always adjust, which makes it challenging. As you score points, you can upgrade your paper ball into new objects, such as staplers, 8-balls, and even a paper ball on fire, which might light the environment on fire if you miss. 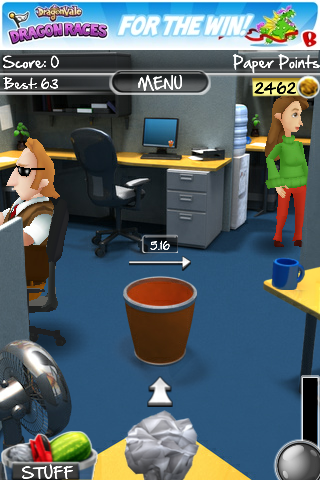 It’s a fun game and one you’ll likely enjoy for a few minutes as you wait for your ride or before class starts or whatever. There are a few different environments, which give you different challenges (such as a moving target or a target further away).

This game is essentially collecting creatures and upgrading them to do better in battle, though these are represented by cards. You start off the game choosing one of three categories of cards. You can play as Man, God, or Demon. Each option gives you access to a whole slew of cards. I chose the God option. Below is what the cards might look like.

Once you have a card, you can choose to evolve it (by combining two cards of the same name) or enhance it (by sacrificing other cards you don’t want to make this one better). You can complete quests using these cards to gain more experience and cards. Or you could choose to battle other individuals, pitting your cards against theirs. You basically choose 5 cards you want to take into battle (and you can also set 5 cards that defend you when others attack).

Below is what questing looks like. Villains show up on the screen and you click to destroy them. They don’t deal damage, they just sit and wait to be killed. It’s basically just expending your in-game energy and gaining money/experience.

Now the good parts of this game. The artwork is cool and the evolve/enhance mechanics are pretty unique. However… the bad… Questing is just clicking and gets pretty boring. Plus the stamina requirements ramp up pretty quick so I’ve gotten to a point where I only have enough stamina to do a few missions at a time. Also, I can’t compete with others at my level. Somehow I missed a memo and my cards aren’t even comparable to what other players have. So when I try to battle them, I get destroyed. And every time I login, I have a dozen defeats against me each time. It’s a little frustrating. The artwork and mechanics are interesting but it starts to fall apart in the bigger picture.

In this side-scrolling murderfest, you star as Jaws. Each level, you have a goal to accomplish and you destroy everything onscreen until you meet the objective. For example, you might have to eat a certain number of fish/people/airplanes/whatever. Or maybe you have to survive to a certain point.

This game is another perfect one for when you have a few minutes to kill. There’s no comparative scores so you’re not up against anyone else. It’s completely on your own terms. The graphics are pretty good and the levels give enough challenge that it’s not too easy. For instance, boats start to shoot at you or drop explosives into the water. So, to recharge health you have to eat more unknowing victims.

There’s a decent level-up system where you can spend points on buying bigger bites/faster lunges/higher jumps/etc. I don’t really notice the differences though. Overall, a solid game and a good one just to keep on your phone for when you’re stuck somewhere and bored.

This game is another fantasy-based game where you battle others. However, there are some things that definitely put this game higher on the ladder as opposed to Rage of Bahamut. Here, you equip different heroes (each with unique perks) and then you can do 3 things basically. You can choose to quest, which is a similar click=experience function, but with a deeper story (kind of). The other two options are where you go to battle. You can face other heroes, pitting you and your army against theirs. With in-game money, you can buy army members that each contribute certain values to your army. For instance, you can purchase knights or you can spend a little more and buy angelic warriors. These warriors are basically just a number, adding to your total.

The thing I love most about this game is that you can choose to fight monsters with other players as opposed to fighting them. For instance, maybe I choose to fight a giant dragon. I can then do a shout-out to my in-game friends and ask for help. They can use their in-game energy to help me defeat it. The more you deal it damage, the more rewards you receive. If I don’t do much, I’d receive maybe a few soldiers. However, if I’m the leader, I might receive rare artifacts, better soldiers, and maybe even buildings that help to give me currency. This “monster hunting” mechanic is really cool.

See? There’s also a good “guild” mechanic so that you can help other guild-mates with the monsters that they’re facing. The graphics are clean and engaging and there’s generally more to do than in Rage of Bahamut. I also don’t feel underpowered for my level, since I’m mostly playing cooperatively as opposed to competitively.

If you’re a fan of the fantasy genre and want a game that you sink several hours a day into, this game might be for you.

Some decent games, whether you prefer 5 minutes a day or 2 hours a day. I’ll be in touch as I download and try out new games!

1 Response to iPhone Game Recommendations: Round One