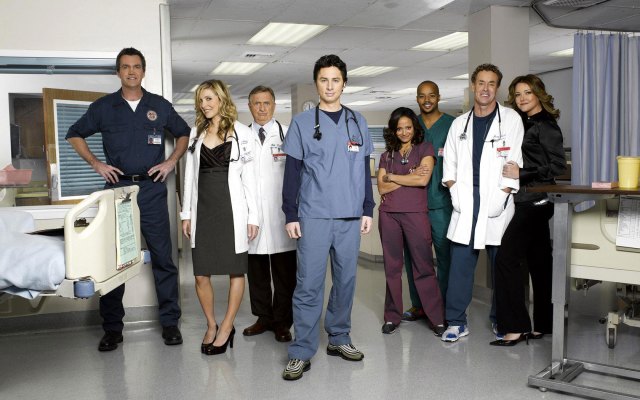 In the “Finally Caught Up” series, I review shows that have finished their run and look back at outstanding episodes, actors, and highs and lows of the show. I know for me, I don’t have enough hours in the day to keep up with all the shows I want to watch, so hopefully this will give you some insight into if the show is worth watching, now that it’s completed. I’ll cater to both people who have never seen it and those that were fans of the show in question.

Our first entry is a show I’ve just finished via Netflix streaming, Scrubs. I watched the first four seasons when it was airing live and then lost track. When I found the show on Netflix, I started over and went through the whole series.

Here’s the basic gist. We follow three individuals as they begin their internships at Sacred Heart. JD (Zach Braff) and Chris Turk (Donald Faison) have been friends all through college and med school. Elliot Reid (Sarah Chalke) enters the mix as the flighty blond intern who captures JD’s heart. Each 30-minute episode follows each intern as they struggle with something, usually a hospital case which teaches them something about their personal life as well.

This show is hard to define to a genre. It is a comedy, as JD’s imagination often gets the best of him in hilarious vignettes of his daydreams. But the show is also surprisingly deep for a 30-minute show. As the interns learn to cope with death and illness and the “fairness” of life, some episodes had me bawling like a baby. The show is 9 seasons long (though the last season is a tragedy that should have never occurred) and the character arcs are extremely enjoyable.

I would compare its comedy side to something like 30 Rock, where it often takes you out of the “real” situation and gives you exaggerations of reality. The dramatic side reminds me a little bit of Grey’s Anatomy, not because of the hospital setting but because of the intense emotional responses to what happens in a hospital.

If you haven’t seen Scrubs, I would give it a shot and see if its blend of drama and comedy suit you.

* From this point on, it’ll be spoilers for anyone who hasn’t seen the show. *

Outstanding Actors: Even though Zach Braff, Donald Faison, and Sarah Chalke carry the show, they may not always be the brightest stars. My favorite character and the one that probably showed the most depth was the gruff doctor who teaches weekly lessons to our intern, Dr. Perry Cox (played by John C. McGinley). In the beginning, Dr. Cox seems very 1-dimensional, serving as the obstacle that our interns have to overcome. But as his wisdom begins to show through, you also begin to see his good intentions. His brash attitude reveals that he’s fighting against hospital administration, because he wants to do good for his patients, not necessarily for the hospital. And his tough love often reveals to our leading trio that they have a lot to learn. The small moments where you see the actual affection that Dr. Cox shows to these interns and how much he feels for them… those moments are incredible.

The theme song to Scrubs (full song here) is amazingly catchy and the intro is a very unique style visually. There are actually different variations if you watch closely. And once Elizabeth Banks’ Dr. Kim Briggs is introduced, she fixes the fact that the x-ray is actually backwards. When asked, show creator told fans and critics alike that putting the x-ray backwards was intentional to showcase the mistakes that beginning interns might make. In terms of theme songs I love, this one falls at the top of the charts.

The highlight of Scrubs for me would likely be seasons 1-4, when the leading cast is still young and learning, as opposed to later seasons when they take on a teaching role. The greatest episode of the series, in my opinion, is “My Screw Up” (season 3, episode 14). The episode features Brendan Fraser as Dr. Cox’s brother-in-law who has cancer. The entire episode, Ben (Fraser) follows Dr. Cox and gives commentary on his life. At the end of the episode, it’s revealed that Ben has passed away and this episode was Dr. Cox trying to come to grips with this fact. The episodes following are pretty strong as well, as Dr. Cox tries to cope and JD is forced to realize that his mentor is just a man who sometimes needs rescuing as well.

The show definitely hit a low in its last few seasons. Season 8 began with removing Dr. Kelso as Chief of Medicine, which took away one of the core antagonists. Instead of removing Kelso completely, they added him as comedic relief, as he refused to leave the hospital. Though this was funny at times, the show began to lose its dramatic punch. The show also began to focus on the new interns, which cluttered the story and lost focus on our three main leads.

And then there’s season 9. Season 9 changed everything. Theme songs. Cast. Setting. It was more of a spinoff than a continuation. Braff only stuck around for a few episodes, while McGinley and Faison carried the burden. But the story wasn’t even about them, it focused on a whole new cast. In looking back on this short season, I realized there wasn’t anything especially wrong with these characters, but they just weren’t the characters I wanted. Season 8 had an incredibly strong series finale (and they intended it to be the end of the series). But then everything they did was ruined when they came back for season 9 and then the show was cancelled, ending an incredible series with a horrible mid-season episode. Scrubs deserved better than that.

Overall Review. Scrubs taught me about life, love, friendship, and growing up. I don’t think I appreciated all these facets when I was younger, but being in my late-20s I can relate a little better to what’s happening in the show. It’s hilarious at times but when it hits, it hits hard. It’s just a shame that the show was continued past its prime and left a somewhat bad taste in our collective mouths. Season 8 had a fantastic ending and it should have been the final episode of the series. Overall: Fantastic.

6 Responses to Finally Caught Up: Scrubs