Zynga: Blood in the Water or a Starving Shark?

Zynga. The near-billion dollar god of the social gaming platform. Zynga is the powerhouse behind Farmville and other population-building games like Castleville, Empires and Allies, CityVille and more. They’ve also branded the successful Words with Friends and even popular Zynga Poker variants.

For awhile, Zynga was the hero. Prior to the gaming explosion, the “app” feature of Facebook was usually for ridiculous “Honesty Boxes” and astrological forecasts. After the launch of Farmville, though, gaming became synonymous with Facebook. In 2011, Zynga boasted over 265 million monthly active users across the board. They also popularized using real-life cash… in exchange for completely imaginary goods. They made a revenue of almost $950 million in 2011, with most of their revenue coming from “virtual goods.” They actually make very little (relatively) from advertising, which is flipped from most other social media gaming developers.

I admit, I’ve played most of the Zynga titles. CityVille, Farmville, Castleville, Empires and Allies, Words with Friends… I think that might be all of them? There’s so many.

But my first interaction with Zynga left a bad taste in my mouth and I think it might’ve foreshadowed what’s happening today.

It was 2007. The television show Heroes was popular and gaming was beginning to become popular on Facebook. There weren’t dominant games, as there are today. I played a relatively unknown game called “My Heroes Ability.” Yes, it probably infringed on the show’s copyright. Anyways. It got to be a wildly popular game. And then one day, all development ceased. The usually vocal developers went silent. And then a single word of gibberish appeared in a hastily-written note. Zynga. Someone had bought My Heroes Ability. And they didn’t see the need to continue developing the game, so would just let it sit in its current state until the users abandoned it (paraphrasing). I had no idea what Zynga was. But in the coming months, I saw it spread. Games popped up and other games were phased out.

Well, people rode the Zynga wave for awhile. It was great. I could play FarmVille with my Mom if I wanted to.

But something happened: Zynga went public. Since everyone loved their games and they were making bank in virtual goods, the public assumed that this move would result in a huge boost. However, this didn’t happen. They began their first day at selling $10 a share. Usually, the price would go up because people were buying them. Zynga however closed their first day at $9.50, one of the only social media-related businesses to drop that soon. As of today, Zynga sits at $10.39.

So here’s where we are now. Zynga is now being traded publicly but they are under extreme scrutiny. Their 2010 monthly users was a huge number. However in 2011, their monthly user count was nearly identical. There just might be a cap on how many people will click cows for fake gold coins.

We now have a somewhat desperate global media developer… and they need to make money. They have something to prove. They’re not a one-hit wonder, are they? Are they?

Something strange started to happen. Games started coming out that looked eerily familiar. I used to play Restaurant City and I loved it. But then CafeWorld was released to the world. Mafia Wars was released to combat Mob Wars. PetVille fought off Pet Society. Even FarmVille came in the wake of FarmTown. All of Zynga’s releases essentially destroyed the competition. How many of the originals still hold places on Facebook’s most popular games?

Finally, someone stands up to Zynga. There was a small developer called Nimblebit (3 people). They created the 2011 game of the year for the iPhone, Tiny Tower. And now, Zynga has released a beta of their new hit Dream Heights. Nimblebit created this interesting infographic detailing just how close these two products are and just how desperate Zynga is to recreate someone else’s success.

This is of course on the iPhone front but Zynga’s latest Facebook release is a similar story. I tried out a game a few months ago called Gardens of Time, which was essentially a city-builder mixed with “eye-spy” games, where you’d have to find specific items in a crowded picture.

Gardens of Time was given the coveted Game of the Year award for Facebook. The committee not only looked at pure numbers, but also player satisfaction (as designated by reviews and ratings). Yes, Zynga had 4 titles in the top 10, but that wouldn’t stop them. They were desperate and smelled success not too far away.

And now we have their newest title, Hidden Chronicles. Do they look similar? 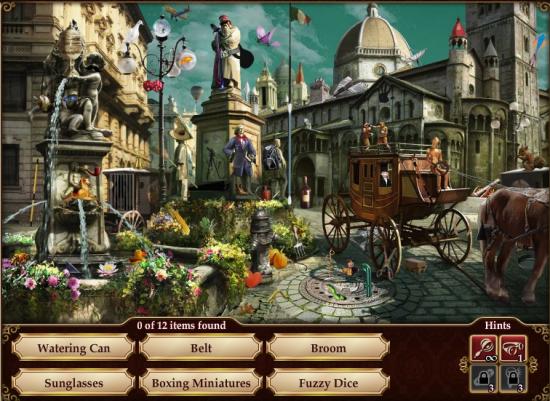 It doesn’t matter which one is which. They’re nearly identical. The sad thing is that this knockoff will undoubtedly steal users who might have considered Gardens of Time, had the smaller game been given more commercial support and more global reach.

Now, the bigger question at hand. Is this too far? When Zynga tries to cash in on popular trends, they literally destroy smaller developers. Is all fair in games? Do you think it’s only fair that Zynga, with its huge global support, take advantage of that? Or should they be held accountable and create their own unique games? Do you think they just sense blood in the water and take advantage, or do you think the starving shark deserves any chance it can get?

If you’re a Facebook gamer, try checking out some smaller titles that might surprise you. I know I’m going to take a detour from Zynga for a bit and give some (small) exposure to the underdogs.

2 Responses to Zynga: Blood in the Water or a Starving Shark?