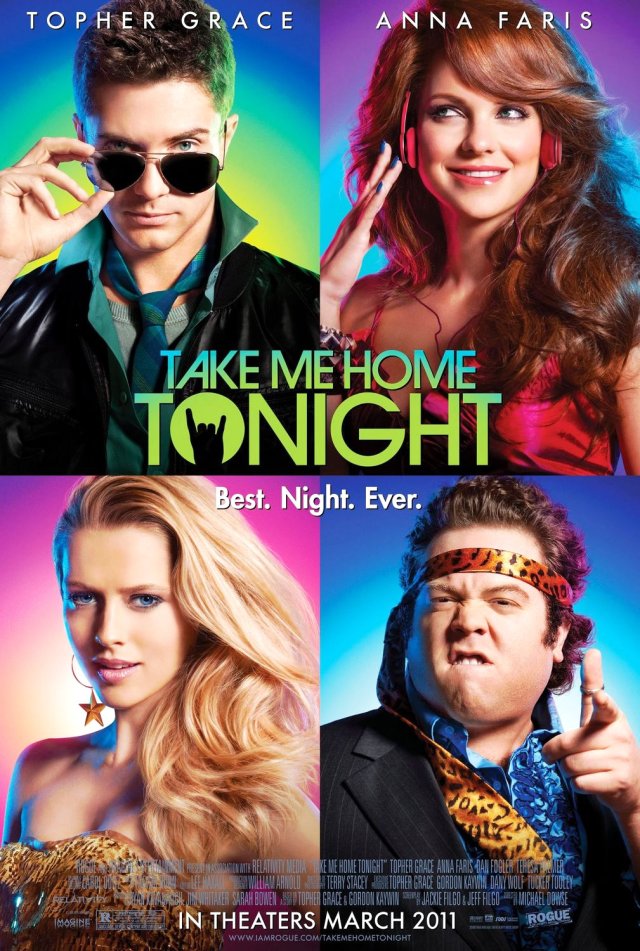 Take Me Home Tonight. This is pretty much the stereotypical American Pie scenario but set in the 1980s. Goofy guy wants hot girl, does embarrassing things, everyone ends happy. I would do a spoiler warning, but this movie is about as predictable as they come.

Topher Grace (who I’m a big fan of) stars as a recent college graduate who is working at Suncoast video, even though he graduated with an engineering degree from MIT. He doesn’t know what to do with his life. His twin sister, played by Anna Faris, is doing all kinds of things, including moving in with her serious boyfriend (played by Parks and Rec star Chris Pratt). Throw in a goofy best friend and unattainable love interest, you’ve got a recipe for (predictable) comedy.

What works: Topher Grace has a natural charm. Maybe it’s because he reminds me a little of me (albeit he’s like a third my size). Although he’s like 33 years old, Grace manages to pull off a convincing college graduate. Anna Faris does surprisingly well as the straight character in this cast of misfits. She’s not cracking jokes and making weird voices, which is a refreshing change and one that she completely owned.

And although the story is completely and utterly exactly the same as every other “Tonight is the night I tell my high school crush that I’ve always loved her” movie, it manages to pull off a surprising amount of laughs. But does that outweigh everything this movie did wrong?

What didn’t work: Dan Fogler, who stars as the crazy best friend, pretty much overdid every scene he was in. Part of it is definitely the writing. They end up doing crazy antics that are beyond unbelievable. He is kind of annoying actually. His only credits of any consequence include the flop Balls of Glory and Mars Needs Moms, if that gives you an indicator of his comedic stylings.

In general, the movie only flourished when overwhelming us with nostalgia. “Hey look, he’s wearing a t-shirt with a gecko on it!” As a film, it flopped on its face. It did absolutely nothing unique.

And let’s talk about wasted talent. Comedic superstar Demetri Martin stole the scene in the two scenes he was given and Chris Pratt was relegated to playing a jerk boyfriend. I only laughed because it reminded of funny things that happened on Parks and Rec. Michelle Trachtenberg also had like four lines. They got some talent for this movie but put them in completely the wrong roles.

And let’s talk utter disappointment. The movie is named after an iconic 80s song. I wanted, if nothing else, to hear this song. That might make this movie bearable. But they didn’t play it! They played other 80s songs that I appreciated, but Take Me Home Tonight was anywhere to be found. False advertising.

Overall: A predictable and common cliche of a movie, starring a hodgepodge of actors that just barely managed to pull of a watchable film.