Age of Champions. Another fantasy / gather your armies / destroy all evil game. But does it succeed? It definitely tries some new things and succeeds (at some of them).

Let’s start from the beginning. Meet my Minotaur avatar. I call him Avataur (I don’t really call him that). 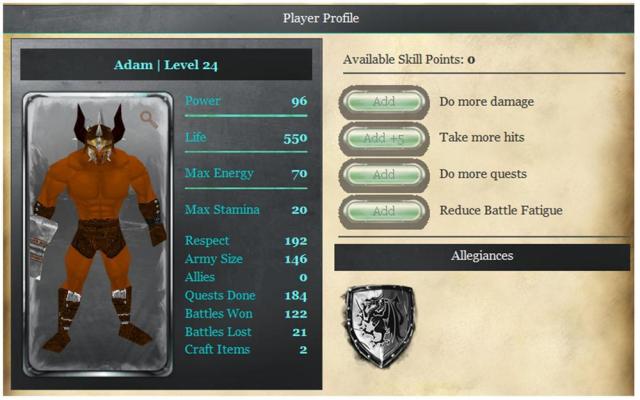 I thought “Who needs a shirt?” As you complete missions and battles, you upgrade his stats. Eventually I stopped pumping up his Power and Life because you soon learn that your hero never goes into battle. You hire minions that do all the fighting, so you’re more of a cheerleader.

Like its sister product Superhero City, Age of Champions has essentially two components. Quests and battles. Quests is similar to any other game ever.

You have a certain amount of energy and you use it to do missions. There is a little bit of storyline but it wasn’t that enthralling. I also never had enough energy, it goes super quick and that can get frustrating. I login to play and it takes me literally five seconds to run out of energy. And do you see how all the missions above are locked? That means I need to level up first. This is a tedious and infrequent process.

When you can’t do missions, you do battles.

This is the “innovative” part of the game, which succeeds and fails at the same time. Like I mentioned, your character does little fighting. You hire goons (either humans, elves, or minotaurs, or combinations) and they run out to the field and fight the enemy’s goons. You can then buy them different supplies. As you progress, you’ll buy better swords, better armor, etc. You don’t assign them, so I guess it randomly gives out equipment. This part is a cool concept. But then, when the battle starts…

Okay, it might be hard to understand what’s happening up there. That’s what the game is like (and this is actually a pretty calm picture). It’s a mess. I don’t know who’s who or what is going on. I see my avataur up in the top left corner, just chilling. He’s bored. If for some reason, all my guys die, then he’ll run out and fight. This is rare. You choose who you battle, so you always choose enemies who are lower levels or have less troops. So I lose fairly infrequently.

So, battles are kind of a mess. It’s a cool concept to see the battle play out in front of you but the blocky graphics and mess of bodies and blood make it fairly impossible to distinguish what’s happening. “So the main two components of the game are generally unexciting?” Yup.

In most games like this, there’s a “city building” component, but let me show you what the “city” looks like:

One thing that fell apart but was great in concept, was the ability to craft your own unique weapons (kind of similar to how Zombie Lane had you creating flamethrowers out of Super Soakers and gasoline). The downside is that these ingredients are impossible. Maybe I’m too low of a level (I’m level 24) to have crafted them. I made one poisoned knife. I have a bunch of ingredients but I don’t see any items which would use them. It’s confusing.

Could have been awesome.

So… What’s my verdict? After a few weeks and 24 levels, I’m unimpressed. I’ve seen more engaging missions, better battle systems, better city building, more impressive weapon crafting, and in general better graphics for a Facebook application. There was zero reason for me to continue this game. In this genre especially, there are thousands of games waiting to be played, so why settle for less?