Superhero City. There are very few “popular” games that I’ve played that actually accomodate new players. I usually feel like a small fish in a big pond, like everyone got a huge head start. Well, Superhero City wasn’t like that. It’s been around for years but the style and gameplay was easy for a newbie to pick up and it actually hides a lot of the game until you’re ready for it. It scales exceptionally well, meaning that I’m fighting other newbies in the beginning, not level 300 mammoths.

So here’s the premise. You create an avatar of your superhero. But you don’t choose a power. In an essence, you collect powers. Let me showcase my beautiful creation.

This is the Atom Bomb.

You don’t have to create a backstory, but if I had one, it’d be that Atom Bomb appeared from the stars, so he’s part alien and part an otherworldly god figure. Once you create a hero, there’s two things you do.

The first thing you can do… You do missions. I just opened up the area “Cairo” and here are the missions at my disposal:

As with most Facebook games, you have an energy bar which determines how much you do in a set time limit. If I had 92 or more energy, I could do the last mission (“Defeat a Living Statue”). It tells me how much experience I’d get and how much money I’d earn. This mission also has a chance for a rare ability, meaning I might get some new powers by doing this mission. As you level up, you can do more missions.

You can also see above that some of the missions have requirements. Sometimes it requires a certain amount of teammates. These can be either real-life people or you can use your in-game currency to buy teammates. I’ll explain why this is important when I look at powers.

Some of the missions also have requirements of a power that you have to have. To stop a train from crashing, you need to have superstrength. These are powers you can buy, using the in-game currency, so you’re able to go and buy that power if you want to accomplish this mission.

If you use up all your energy and you can’t do any more missions, there’s something else you can do. You can battle other players near your level. I chose to battle a guy named Riptide.

Each battle is played out in front of you, blow by blow. This is the coolest part of this game. You can always skip the battle, by clicking on “View Battle Results.”

Each combatant uses one of their higher-ranking powers. To determine who goes first, there’s a number at the top which is generated randomly based on your stats and abilities.

Okay, his ability that he uses was like a “giant arm” ability or something about changing size. Down at the bottom, you can see our top-ranking abilities and then some statistics. The background for the battle is a little blurry because the background is actually moving, like we’re on a train. The battles are pretty cool, though some of the animations for abilities are a little weird. Below, here’s me using a “plant manipulation” ability to do some damage. 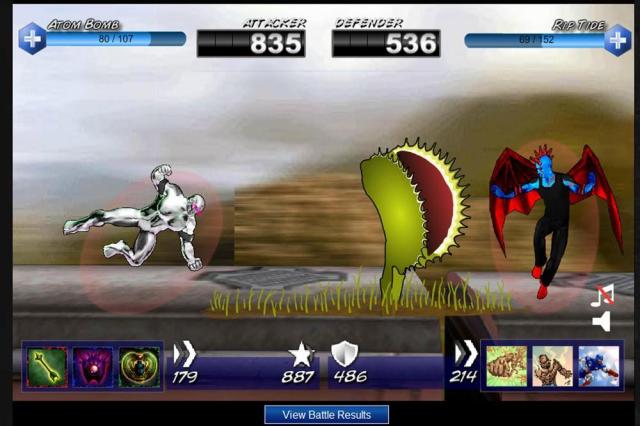 That is a giant venus fly trap.

Anyways, the battles are a good way to level up and gain more money.

So… More on the powers that you acquire. Here is my layout of powers: 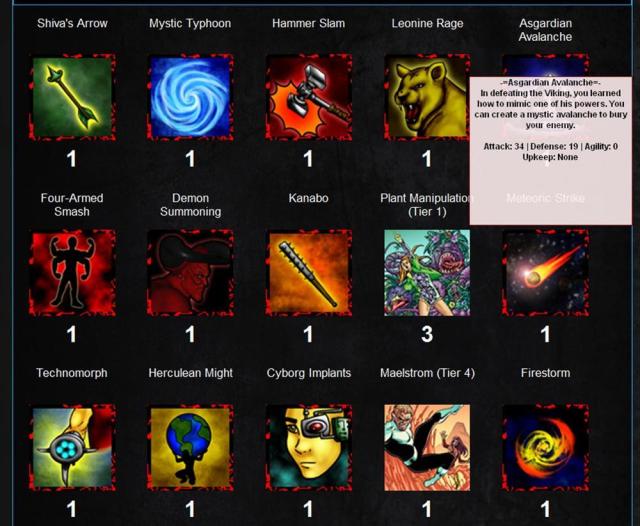 These are my top powers. If you scroll over, it’ll give you the stats that ability offers. Now, the giant number underneath. This is how many of your teammates are trained in this ability. If I play the game by myself and never add teammates, I will only have the Shiva’s Arrow ability. At this point, I think I have 11 teammates, that I’ve bought. That means that the first 11 abilities add to my base statistics. You can see why it’s advantageous to have teammates (it ramps up your stats really quick).

So, that’s the basic premise. You do missions, you battle, and you gain and upgrade your abilities. But is it fun?

Yes. This is one of the few games that I foresee playing for awhile. It’s easy to play for a few minutes and then leave. If you have time, it’s also easy to spend a bit of time here. Leveling up is often, so you don’t have that annoying feeling of “I just want to play this game but I’m always out of energy.” The ability to customize your hero is a definite plus and the avatars can be breathtaking. The animated battles are also a plus, being able to see your abilities manifest themselves.

If you’re looking for a fun game and something that is really easy and accomodating to new players, Superhero City is it. Fight evil with me!

Entertainment. Gaming. Dreaming.
View all posts by adamryen →
This entry was posted in Facebook. Bookmark the permalink.