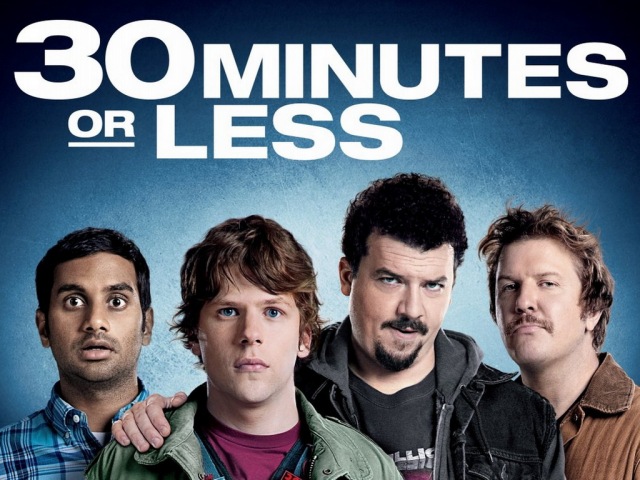 30 Minutes or Less. Now… This movie hits exactly what it was aimed to hit. There’s a lot of profanity, insane moments that leave you reeling, and some explosions and action scenes that manage to fit in. It’s exactly what the trailers would have you expect.

In that regard, this is a hilarious movie.

Here’s what goes down… Danny McBride and Nick Swardson are two losers who want to pay an assassin to kill McBride’s dad and get the inheritance. They decide the easiest way to get the money to pay an assassin is to force someone to rob a bank by strapping a bomb to their chest. Jesse Eisenberg is the bomb-carrier and he’s assisted by Aziz Ansari. Stellar comedy cast. But do they nail it?

Jesse Eisenberg doesn’t do anything too different than any other character he’s ever played. He’s neurotic and kind of freaks about stuff (small stuff usually, like getting a bomb strapped to your chest). Aziz Ansari is the same old Aziz, which is what people love. On the other side, we have Danny McBride and Nick Swardson. McBride is pretty stereotypical, but Swardson plays in a new sandbox, usually stealing the scene from the other more heavy-handed comedians. On a side note, please do not see “Buck Larson: Born to be a Star.” Trailer here. I hope that Swardson already regrets doing that movie.

One thing I was concerned about is that the runtime is only 83 minutes. However, the movie didn’t feel that short and in fact felt just about right. Not rushed but really forced the story to move along quickly, which I appreciated.

This movie does a lot of things right. It’s hilarious, quotable, and definitely re-watchable. It is exactly what you’d expect. No surprises. But that’s also the downside. It doesn’t try to do anything new or different and it definitely doesn’t stretch the acting chops of any of our stars. That’s the only thing that keeps this from a 5-star rating. But you can’t really be upset that it managed to tread familiar ground and still get gut-wrenching laughs.

With the short runtime and mostly verbal action on-screen, I’d recommend you wait til DVD to check this one out and use your money on a blockbuster that needs big-screen attention. But in a few months, definitely keep an eye out for this movie.