How X-Men 3 COULD Have Been a Great Movie

X-Men: The Last Stand is generally perceived as the worst of the X-Men movies (maybe tied with Wolverine: Origins). I watched it this morning and I realized that it was close to being an awesome movie, but it did a few things wrong.

Phoenix Vs The Cure. There are essentially two storylines that run through this movie. There’s the issue of Jean Grey becoming the Phoenix and then there’s the issue of a “mutant cure” and Magneto trying to destroy it. These should have been two separate movies. They do a good job of making the Phoenix look powerful but it’s pointless because Magneto keeps her on the leash until the last 20 minutes. If a movie were to focus on the Phoenix, she should be the villain, not a henchman. They could have done a solid movie without Phoenix. Focus on Magneto and his crew and how they try to destroy the cure. They could have made Juggernaut the “force” that Jean turned out to be. Juggernaut could have been unstoppable, culminating in an amazing final battle. These should have been two movies.

Killing people off. By the end of the film, we have three dead characters: Cyclops, Professor X, and Jean Grey. This is horrible. In an effort to show how “powerful” Jean is, she kills Cyclops and the Professor? Bad move.

Villain choice. I’ve been waiting since I was a kid to see the Juggernaut on the big screen. He came off as not that impressive. He’s supposed to be unstoppable. Let’s see some rampages! And for God’s sake… HE SHOULD HAVE FOUGHT COLOSSUS. These two are natural enemies and perfect for an all-out brawl. Instead, Colossus resorts to throwing Wolverine around. Waste. Also, Pyro was well-played in X2 but got the spotlight stolen in X3. Take Jean out of the equation and give more screentime to Juggz, Pyro, and even Multiple Man (seriously, no fight scenes for him?). And don’t even get me started on the horrible mutants that they created (ie, the Pufferfish). There are decent and interesting villains in the X-universe that were pushed aside so we can hang out with this guy? 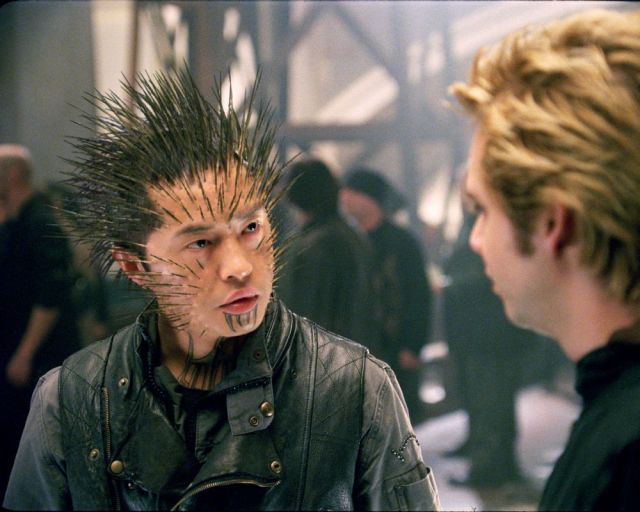 Heroes. Here’s what they did wrong with the hero lineup. They broke Colossus down and really only kept his mutant power. He’s supposed to be a soft-spoken Russian artist. Instead, he’s just a guy. I just watched the movie and I can’t even remember a single line he said. Actually, all of the young’uns kind of get the shaft in this movie. The Iceman/Rogue/Shadowcat love triangle was extremely unnecessary. In X2, I loved the scene where Iceman takes the X-Men to his house and has to tell his parents that he’s a mutant. Amazing. In this movie, they’re all relegated to background extras pretty much.

And then there’s Angel. I appreciated the story with his father inventing the cure but after that, Angel was pretty pointless. He should have joined the X-Men and actually joined them in combat. He should have fought for what he believed in. He swooped in and saved his dad but his story was completely unresolved. Ben Foster was a nice choice for casting though.

Let’s talk Beast. Beast is probably one of the few things I think they nailed. Kelsey Grammar was an inspired choice and focusing on physical makeup effects instead of CGI was a nice move. I appreciated his storyline of being involved in the government but choosing to side with the X-Men when the time came. Other than the effects being a little sketchy (some of Beast’s trademark acrobatics were groan-worthy), I think they did a pretty solid job incorporating him.

So… Here’s what could have solved everything.

Second movie. Phoenix. Cyclops and Charles survive. Maybe Charles goes into a coma. I could see that, since Jean is so powerful. Cyclops and Wolverine have to work together to take her down and eventually have to kill her. Having these two work together in this heartbreaking moment would be truly captivating. The two men that love her beyond words have to kill her. The background storylines could focus on maybe a Colossus/Shadowcat romance, reminding Cyclops of what he and Jean had. Again: heartbreaking.

It was a bad movie. But it could have been two great movies.