World of Warhammer (aka My Nerdiest Confession)

I do a lot of things that might be perceived as nerdy. But above all, there’s one thing that stands out as being probably the pinnacle of my nerdiness.

It’s called Warhammer. It’s a tabletop war game. That’s the worst of it, you can judge me now. Before I blow your mind.

So, what is it? I buy little miniatures, build/glue/sculpt them, and then paint them. And then when they’re done, you play a game, using them as the pieces.

This is what’s called a sprue. You have the pieces to usually make a variety of things. This specific sprue is for a giant stegadon (similar to a triceratops). 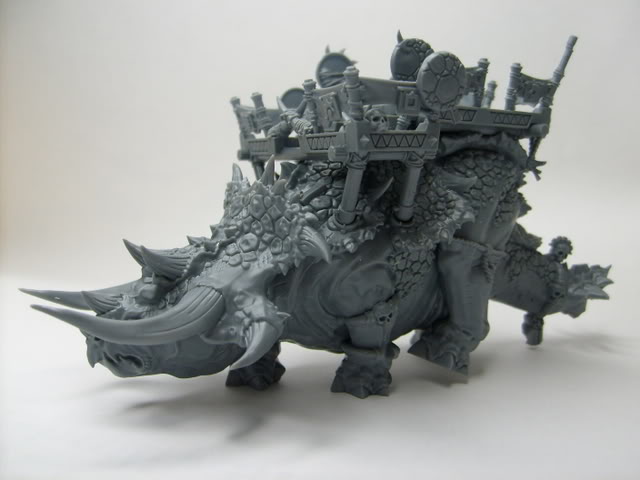 And when it’s all done and painted, you end up with a model like this: 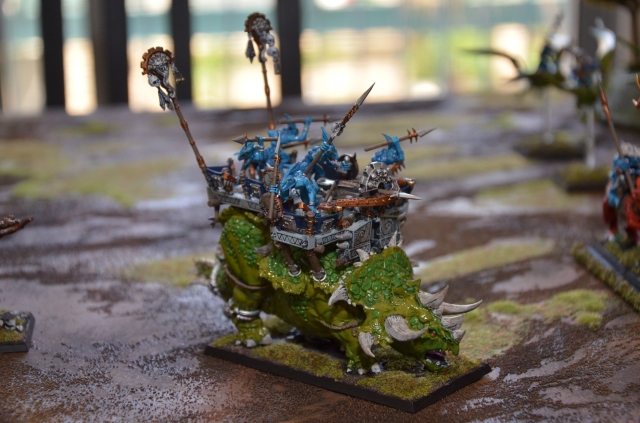 That’s my baby. And now the kicker… This hobby is expensive. To buy this guy is about $45 before even building/painting. Because of the price factor, I’m the only person who has any models of his own in my social circle. I have friends down to play the game but I provide the miniatures.

So… I don’t play the game much but it’s incredibly fulfilling to create these models and paint them to look like whatever I want. It’s mixing my artistic desires with the deep fascination with Tolkien-esque fantasy settings. There’s even a line of models after the Lord of the Rings canon, so you can reenact those battles if you wanted.

“What kind of a game is it?” Imagine a game of chess with a little more character. Each model has unique skills and attributes and you get to choose where to move them and what to do with them. The stegadon up there for example has a giant bow mounted on the front, so he’s going to be taking out guys from afar. And once he collides with another model, those tusks up front aren’t just for show. There are dice involved in how much damage is actually dealt but a lot of the game depends on skill and strategy and knowing when to charge your stegadon in and when to hold back and pelt the enemy with arrows.

So, I’ve completed three “armies” that you can play as, which all have distinct flavors. There are 14 armies in the Warhammer universe to choose from when you begin playing, these three just stuck out to me.

To get a feel for the entire Warhammer universe, check out this battle-scene created for the PC game Warhammer: Age of Reckoning.

Okay, so now here is where I’m going to showcase my final pieces. This is going to be super pic-heavy but hopefully you can appreciate the work knowing what they started as. I’ll also point out a few that are pretty much scratch-built (meaning made from scratch).

This army focuses on what are referred to as the greenskins. Some heavy bruisers like trolls and giants and then small yet mischievious goblins.

And in case you’re admiring my table, I created it out of an old styrofoam board and then covered with sand, painted it, then covered it with faux grass and small rocks to give it texture.

The leader of this army is called Gorbad Ironclaw. I didn’t come up with the name. He rides a massive boar into battle, which gives him speed to race across the table and handle most anything that the opponent is playing with. 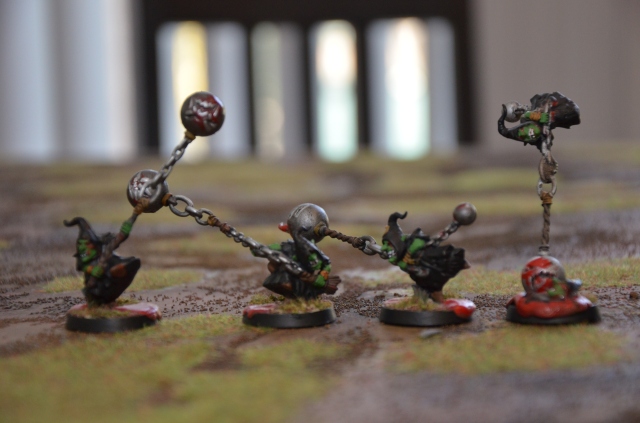 These units, called Fanatics, spin out onto the battlefield and can possibly cause just as much harm to your army as to your opponent. Each turn, they actually move in a random direction so they could easily turn and run straight through your own line. But if you manage to get lucky and they hit your opponent, those giant steel balls cause some major damage. 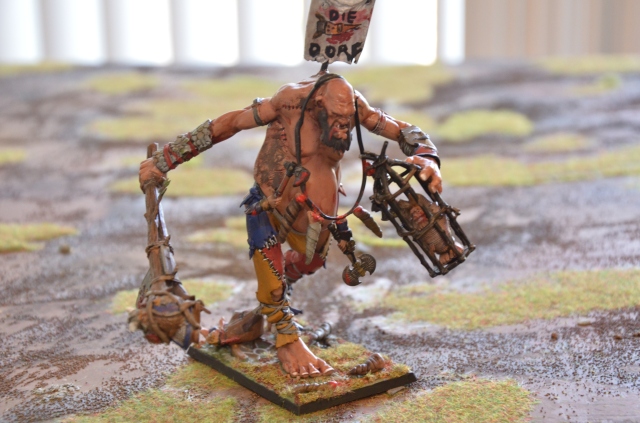 The natural enemy of the greenskins is the dwarves. With that in mind, I converted this giant model to reflect their hatred of the dwarves. If you’ll notice, there’s a dwarf tied to the end of the giant’s stick, there is a dwarf caged in the giant’s other hand, the giant is wearing a necklace of axes and dwarf beards (cutting off a dwarf’s beard is a no-no), and the giant even has a sign that reads “die dorf.” The goblins are not great spellers.

My second army is based on lizard-like warriors and dinosaur-like monsters. They also have a culture similiar to ancient Aztec or Mayan. 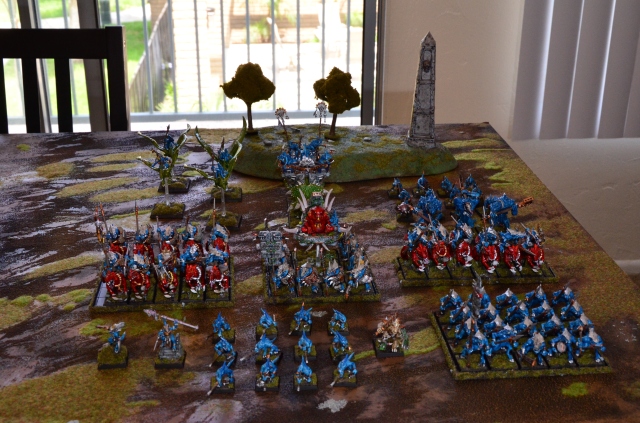 You’ll notice this group shot is much smaller than the Orcs and Goblins shot. That’s because these warriors are much more elite in nature, so it takes less models to make an even army. 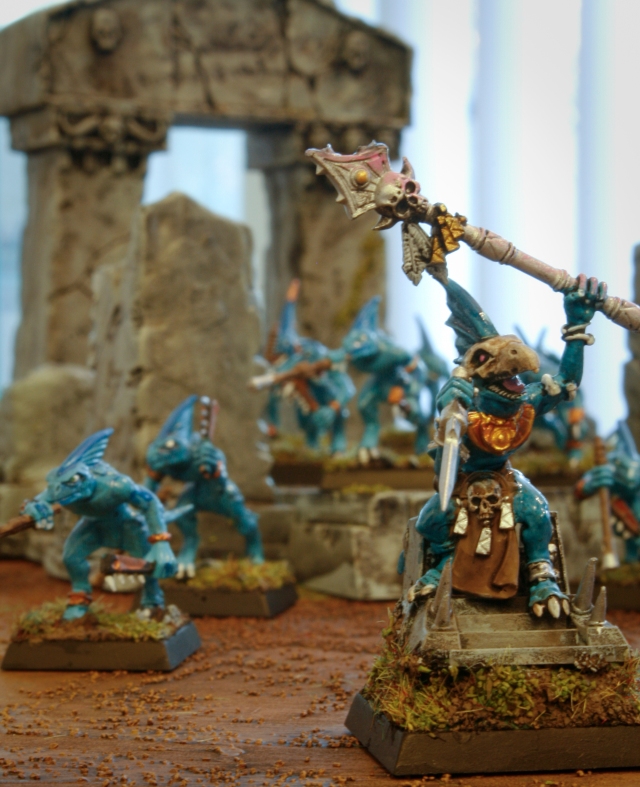 Featured above is a “skink priest,” a wizard that can wield lightning and call it down to the battlefield. Behind the priest, you see other skinks with poisonous blowdarts that can take down even the biggest enemies.

This toad-like Mage Priest is one of the most powerful magic users in the game, able to do massive damage. And he’s protected by extremely devoted guards that will die before any enemy reaches him.

To take out other important characters, the Lizardmen bring these flying terradons to battle, able to fly overhead and avoid most big blocks of enemies. They each carry poisoned javelins and are even able to drop rocks on unsuspecting victims.

My final army that I’ve finished is based on elves that live deep in the forests, calling upon ancient allies created by the forest itself.

The only elves I actually have in this army are riding the white horses and one elf who flies on top of a great eagle, in the back. Everything is an ancient spirit from the forest.

This Treeman is the equivalent of a giant for the Wood Elf army. This model is entirely scratch-built, using a putty to create the shape and fake moss to cover the body. I added in extra limbs from other wood elf units to give him “branches” and I even added the head of a Lizardmen mount to the base, to seem like the Treeman is pulling it down into the dirt. I’m really proud of this guy. 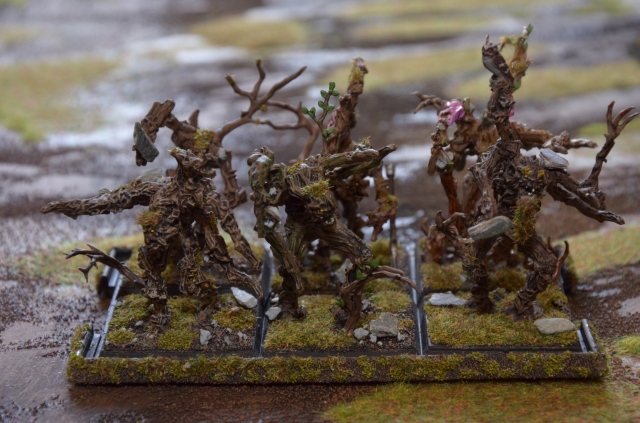 These bad boys are the little brothers of the Treeman but are the backbone of my entire army. I’ve covered them with rocks and moss to give them a sturdier look than they’d have naturally. The one on the right, I even gave a beard to make him seem a little more intimidating.

The wood elf model on the eagle is actually a Gandalf model from the Lord of the Rings line of miniatures. I got it for free at a convention a few years ago and finally found a use for him. The wood elf wizards are unique in that they can actually modify the terrain on the battlefield, such as moving the section of trees behind them. If enemies become trapped in the trees, many of the wood elves’ powers become more damaging.

Overall. Hopefully you can see the artistic side of the hobby. I’ve sold quite a few models on eBay and people will pay a lot for nicely painted models, so they don’t have to assemble and paint them themselves. The game is also really engaging and strategy oriented, and you truly feel like you’re commanding on army of epic proportions. I have everything to run the games, so if you ever want to give it a go, I’d welcome some people to teach. Just let me know! 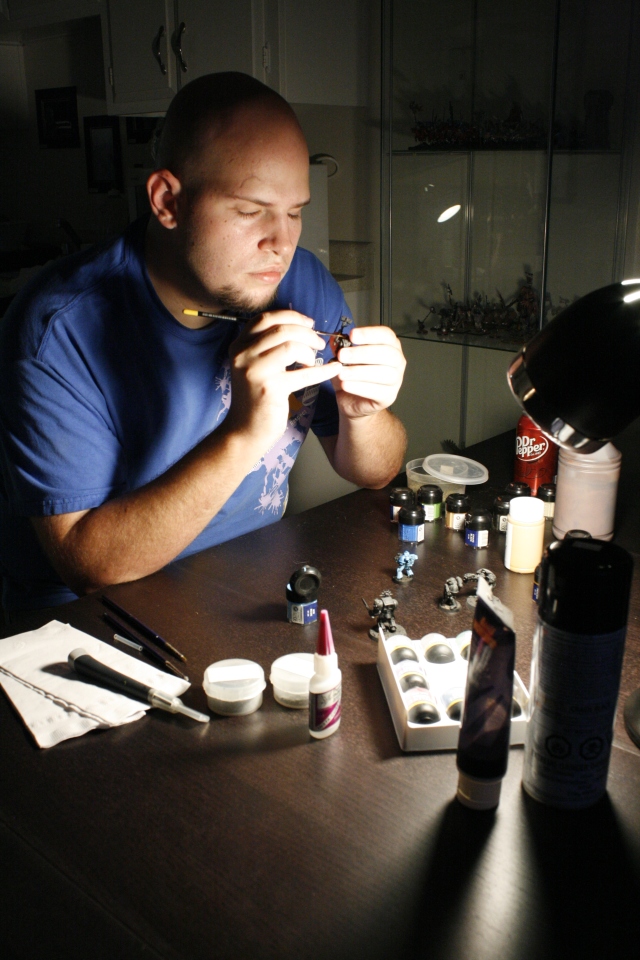 2 Responses to World of Warhammer (aka My Nerdiest Confession)