Zombie Lane. Developer Digital Chocolate has created a concoction mixing two winning ideas. 1.) Zombies, which seem to be all the rage these days. And 2.) Facebook games that force you to create buildings and harvest crops. When you combine these together, you get the quirky Facebook game Zombie Lane.

Most of you are probably familiar with how most Facebook games run. You have a limited amount of energy and you must accomplish goals of some sort. In games like Farmville and Cityville, you’re trying to make money, with no real storyline to speak of. Well, Zombie Lane manages to throw in an interesting story, so it seems like all your hard work is towards something.

Let me show you what it looks like. First off, you create a character. 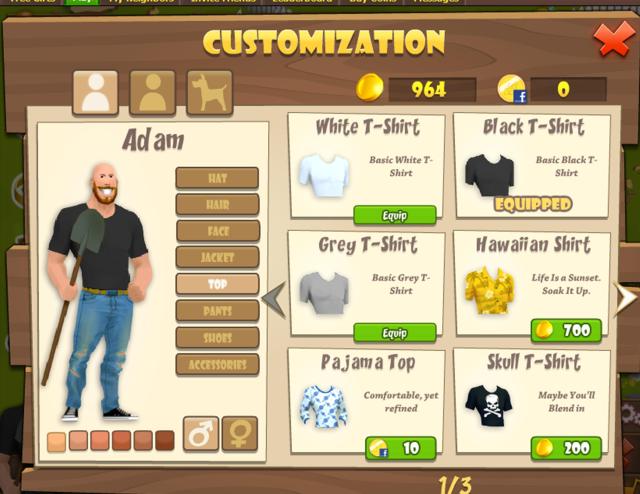 Well, he is a dashing young man. With a shovel. As you earn money, you can invest in other clothes, accessories, and weapons.

The story launches with you realizing there’s a zombie outbreak, right outside your house. Your wife is gone and you have to defend yourself. With each “energy” you have, you can either attack zombies, build an item, fix an item (such as a broken fence, which could keep zombies away), or even clean up trash. So, it’s all about priorities.

If you want to play the game in a very Cityville or Farmville kind of way, you’ll focus on building and cleaning. You want it to look nice. However, others can play it very focused on zombie-killing, so they can invest their energy towards slaying the undead. 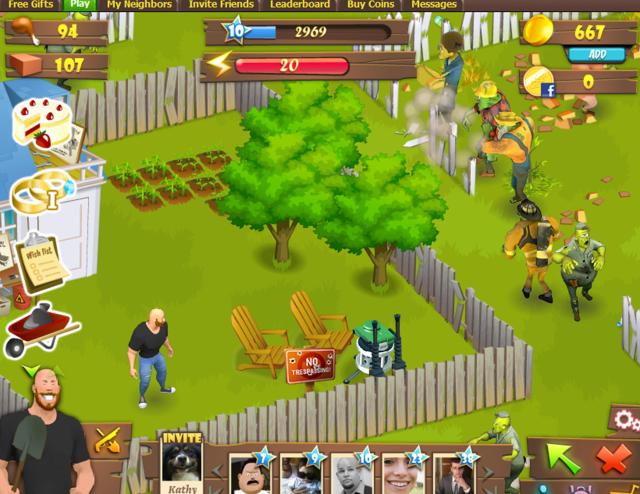 Luckily, the game moves pretty slow (just like the zombies). You are probably looking at that screenshot and thinking OH MY GOD THERE ARE ZOMBIES ABOUT TO BREAK THAT FENCE! Well, let me assure you… I’ve been playing for about a week and they haven’t broken through that fence yet. And even when you charge out and bash them with your shovel, you can easily run back inside your little protective fence.

So, to give you a purpose, quests show up on the left side of the screen, to give you goals to work towards. For instance, maybe a neighbor is willing to trade shotgun shells for some apples. I’ll grow some apples. Maybe my wife called and she needs me to kill 50 zombies over the course of 10 hours to make sure she has a clear shot to make it home. It gives the story a sense of urgency and also a sense of importance.

What works? The game looks nice. It’s very colorful and there are a lot of quirky characters roaming around. The zombies are pretty redundent, but I guess you need to be able to tell what kind of zombie they are just by sight. If you need to collect motor oil, you’re on the lookout for mechanic zombies. Also, there’s a cool idea of crafting your own weapons.

As you can see above, I can either craft flaming boxing gloves OR I could create a flamethrower by mixing a supersoaker and gasoline. Each of these has a limited lifespan (“uses”) so you’re constantly looking for new supplies.

What doesn’t work? Like most games similiar to this, it’s hard to play with a small number of friends. Luckily, I had a few people that I’ve added for other Facebook games that happen to play this. Without them, I would play for a few minutes tops and then have to wait. Why are there not many Facebook games focused on single-player use?

Really, that’s the only downside. It’s a fun game and engaging and offers tons of stuff to do. If this sounds interesting, head over to www.facebook.com/zombielane and give it a try. Add me as a neighbor and let’s kill zombies together!

1 Response to Living on “Zombie Lane”