Denny’s. Bacon. I love both of these things. For some reason, very few people are willing to go with me to Denny’s. Maybe it’s because it always seems kind of sketchy. But I’m sorry, their food is delicious.

When I heard that Denny’s was launching a celebration of bacon, I knew I had to check it out.

First off, the word Baconalia might throw some people for a loop. It sounds like a disease that someone might have died from back during the dark ages. “Over 10,000 people died of baconalia.”

The word Baconalia comes from bacchanalia, which wa s a wild festival during classic Greek times where people likely did debaucherous things. I personally think playing the word bacchanalia might be assuming that the regular cowd at Dennys has a higher level of education than might be accurate. Celebacon might have been a little closer.

Anyways, let’s get to the meat of it.

I started with a Cherry Cherry Limeade (which is a spectactular drink with free refills) and then I ordered the Bacon Pancakes. If I was going to do this, I was going to really do it, you know? The person I ate with got the Bacon Sampler, which came with turkey bacon, pepper bacon, and classic bacon.

The Bacon Pancakes were actually really good. Solid golden brown pancakes interspersed with amazing little chunks of bacon, salty and perfectly chewy. I already dip my bacon in maple syrup when I eat, so why not just pour syrup onto it?

The eggs were a little undercooked for my liking.

I got a taste of the turkey bacon and it was good, though just tasted like ham. *shrugs* I appreciate the effort.

And then there’s the big finale. 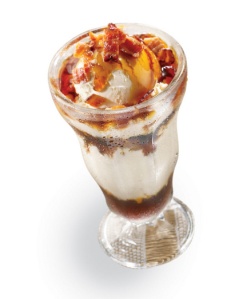 And it was actually quite amazing. I think I got eight new cavities, but it was worth it. It’s vanilla ice cream topped with maple syrup and crunchy bacon bits. The bacon is extraordinarily crispy and I loved the interplay between the smooth ice cream and these crunchy little nuggets of bacon. The maple syrup worked as a topping but when I was done, I had left a LOT of syrup at the bottom of the glass, so I think they might have put way more than it needed. Overall though, for under $3, it was worth it.

If nothing else, you can say that you tried it. What are you waiting for?

Entertainment. Gaming. Dreaming.
View all posts by adamryen →
This entry was posted in Uncategorized. Bookmark the permalink.